Challenges
Improvements
“High productivity”, “high-definition”, and “beauty of the solid area” are required for printing supersized graphics used for decoration of events like concert venues. M-64s fulfills these requirements, which makes it our favorite printer. However, we want to replace it because minor errors occur frequently. We also want to avoid troubles associated with the change of the dealer/maintenance provider (from OKI to Mimaki).
After replacing the machines, they started to operate smoothly and allowed us to work on almost the maximum production from the start. Minor errors decreased significantly compared to the previous machines. The stable operation is generating more cushion on the delivery schedule than ever. We did not have any particular dissatisfaction over the support, but we feel a sense of security in the support of Mimaki specializing in large-format printer.

Nothing can substitute for M-64s 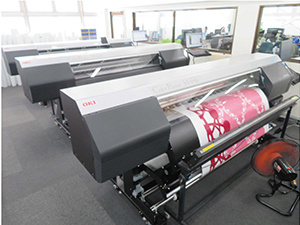 3 units of “ColorPainter M-64s” are in operation.

Shimizu Octo, Inc. is knows as a company that provides management and security services for sport and entertainment events. The company has a “Decoration Division” engaged in stage art work and trade show display as well as outdoor advertisements. Especially, Chiba Studio in Sodegaura City, Chiba Prefecture is a place where a multitude of printed matters are produced mainly for the entertainment field. 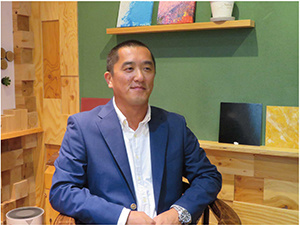 It was 7 years ago that the company introduced its first “M-64s”. Before that, it had 3 units of “JV5” of Mimaki Engineering. M-64s was introduced to replace one of them. Mr. Ryuichi Toga, Assistant Director of the company's Production Division looks back the long relationship with Mimaki since the development stage, “In fact, I was asked for advice by the developer at that time, and talked about the functions required for a printer.”

The requirements he suggested then were “high productivity”, “high-definition”, and “beauty of the solid area”.
The actual completed product fully satisfied those requirements. Particularly, the productivity was as high as 66.5m²/h of maximum print speed, which was remarkable in this class of printers.

“JV5 we used to use at that time was extremely high definition, and the graphics it provided satisfied us. Its resolution, however, was moderate, and we wanted a printer with higher speed. So M-64s was exactly what we needed.” explains Mr. Toga. 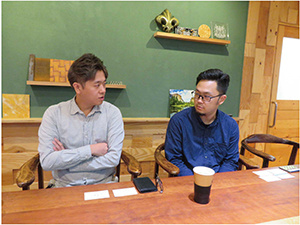 Mr. Yoshitaka Fujita, Director of the Print Division and Daisuke Yoshikawa, an operator

The company undertakes many decoration jobs for events such as live venues. As most of them need supersized graphics printed, speedy production is required to meet the deadline of large-volume print jobs. Meanwhile, solid area and high definition are important when seen from a distance, but visual performance of delicate design is not valued so much in many cases.
An example of such jobs is printing the same design patterns for the length of 150m. Its monthly production volume was 2000 to 3000m².
Mr. Daisuke Yoshikawa, an operator of M-64s has great trust in its performance, saying “When it comes to the speed, nothing can beat this machine in any case.”

Most of the print media are PVC, but M-64s makes it possible to print on YUPO (synthetic paper) in speed-priority mode, which expands the application range.

Having valued the performance of M-64s, the company started to operate 3 unites of them six months after the first introduction.
The company's Shinkiba studio also introduced 3 units of the same printer. This studio is mainly engaged in printing decorations for sporting events. When handling a large-quantity project, the two studios share their printing capacity.
The printers have small individual difference. They often work on printing the same design using 3 machines, but have had little failure in color development and received almost zero complaints.

The speed performance was just as they expected, but there was another advantage beyond their expectation. It is the print stability higher than other IJPs.
To start with, it requires less time for adjustment. They can start printing soon, and the operation is stable. Mr. Yoshitaka Fujita, Director of the Print Division appreciates the stability, “As its head performance is great, we have less missing nozzles during print, which significantly reduces the downtime caused by stopping the machine for cleaning.”
The company's machine operating time is often as long as 10 hours, which makes stable operation an absolute requirement. 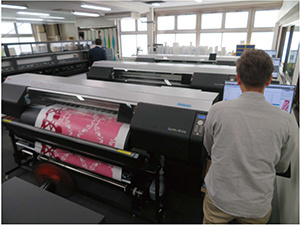 2 out of 5 operators are female.

They currently have 5 operators working with M-64s. Although 2 of them are women, they have no concern about the load during operation because the printer comes standard with the “media lifter” which makes it easy to set and remove heavy media.

Mr. Toga says, “We recently have many female applicants seeking employment, and increasing number of women are working here. Such circumstances make less load during work a condition of purchasing a printer.”

The company has worked with Mimaki since the introduction of JV4, then added JV5 to their equipment. Currently it operates several UV inkjet printers including “UCJV300-160”, “UJV500-160”, and “UJF-6042Mkll”. Recently, the company ordered Mimaki to replace 3 units of M-64s, the solvent ink printer which is featured in this interview. 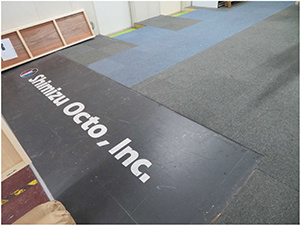 The floor mat used here was also printed with M-64s.

Shimizu Octo replaced all the 3 units of M-64s with new ones in September 2019, and Mimaki has been in charge of their maintenance service. How do users see this change?

Mr. Toga commented, “We did not have any particular dissatisfaction over the support, but we feel a sense of security being supported by Mimaki who are specializing in large-format printer. As with other printers, Mimaki's service response is very quick, which helps us a lot.”

After replacing the machines, they started to operate smoothly and allowed us to work on almost the maximum production from the start. “After replacement, we have much less errors compared to the previous machines.” says Mr. Yoshikawa. Mr. Fujita is also satisfied with the effect of the machine replacement, saying “The stable operation is generating more cushion on the delivery schedule than ever.”

Mr. Toga recommended M-64s, commenting “Any company having many clients concerned with delivery time and cost should consider introduction of M-64s.” 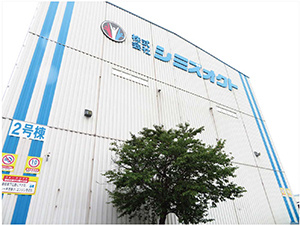 Founded in 1932, Shimizu Octo, Inc., is a company with a history of 80 years.
Its business started in operation of college baseball games at Jingu Stadium, and was expanded to wide variety of fields including operation and security of various sports, concerts, and exhibitions. The company has grown to have 1,500 employees.
In its growing process, it established "Decoration Division" which conducts decoration works for concerts and exhibitions, which is now one of the pillars of its business.

Comprehensive service from printing to applying

The Decoration Division was established in Shimizu Sports Decoration Center. In 1971, the division became Shimizu Butai Kogei. Then in 2001, the group companies were integrated into Shimizu Octo, Inc., which has operated as a single company up to the present day.
The company has a top-class successful track record of sports-related decoration in Japan, and provides behind-the-scenes support for concerts of world’s leading artists, international sporting events, as well as booth decorations for large-scale exhibitions.

Its base in Tokyo metropolitan district is Shimizu Octo Chiba Studio, located in Sodegaura city, Chiba prefecture.
This studio was opened in 1990. Opening of Tokyo Bay Aqua Line in 1997 improved the access to Tokyo significantly, which helped them to undertake over 1,000 jobs as a decoration-related production base. Stage decoration accounts for 99% of the sales of this division. Most of such jobs are related to entertainment including sports.
In addition to printing, the company has their own facilities to transport printed products and install them on site, which is their competitive advantage in providing integrated services related to events consistently.

One of the unique characteristics of its business is that the clients entrust it with the materials and methods of coloring, which allows it to decide details at its discretion, and to realize the ideal form using easy-to-create methods by comparing the quality and cost. 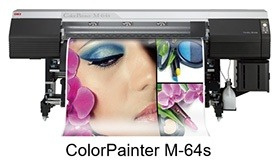