Challenges
Improvements
Reduction of cost, including the time and money taken for outsourced trial printing, and exploration of possibilities of textile design that has many restrictions.
In-house trial testing has resulted in cost reduction in terms of time and money and in improved proposal quality. Digitizing opens up limitless possibilities for new textile design expression.


The encounter with Mimaki is a coincidence.

I got to know about Mimaki inkjet printers about nine years ago. A trading company I know suggested me use a machine, which was not operating very often but enabled transfer to polyester. I had an experience of designing polyester cloth, and I felt like there was an inkjet printer as a possibility of future textile design, so I started to try various approaches to that printer.

However, it initially required a lot of trial and error. By making use of our expertise and experience that we have developed, we have accumulated new know-how for the printer.

The most attractive feature of the printer is its ability to let textile designers make test printing.

Although there are various advantages in introducing the inkjet printer, the most attractive feature from the viewpoint of textile designers is that they can make their own trial printing.

In the past, they had no choice but to outsource the trial printing. Naturally, it costs time and money, because pattern making is required. If we get an OK on our first try, then that is acceptable. But in some cases, there are a lot of re-printing for a reason of the development or nuance of color. In such situation, I just want to know how much to print in the end. Well, that is not surprising.

Using an inkjet printer, you can output your design data in a sample size and transfer it by yourself to create an actual sample. A number of variations such as difference in textile and nuance in color can also be created at a time, so we can offer a wider range of proposals to clients. During meetings with clients, we show them real textiles, which helps them make a fast decision and prevents trouble over its image or color. I think the introduction of printers and press machines, as well as in-house trial printing, has paid off in terms of time, costs and complaints. 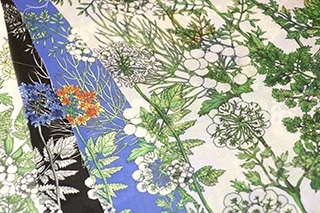 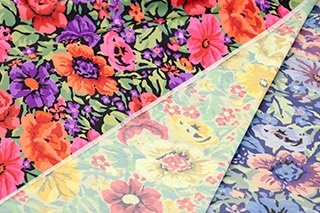 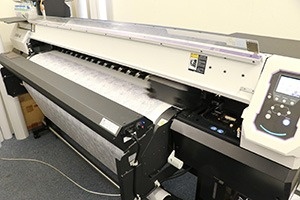 JV300 was introduced four years ago. We have had much less trouble since using this machine. It can endure continuous operation by automatically detecting missing nozzles to make recovery. The output speed becomes faster, and color becomes much better compared with that of the previous machine. I have been a Mimaki user since the previous model, and the technical progress of machines directly leads to the improvement of my business.

Another major reason for my confidence in Mimaki is that color does not change when re-order is received from a client. It is an advantage of inkjet printers that they can respond to small-lot order placement, but there is also a risk of changed color when the same design is re-output at a different point in time. Since clients in the apparel industry are often strict about color, they can easily notice a subtle difference in color, and we will lose their trust. Mimaki inkjet printers can properly produce outputs of the same color, if we use the same machine under the right environment. I think it's really important to be able to maintain high quality in a constant and stable manner, as we keep our business going.

I feel that digitization has opened up unlimited possibilities in the textile design world, as it has in other industries. We used to reluctantly put restrictions such as the number of printed colors and the size of a pattern, but digitization removes almost all color limitations, which even enables gradation that extends over 2 meters. How privileged I am as a designer to be able to challenge what I couldn't do in the past.

I find my new role in industry-wide revitalization. 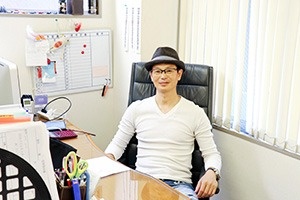 There is no end to my job, and that's why it is fun. I also take pride in playing a role in the constant creation of new trends and their dissemination to the world. New yarns and fabrics are developed one after another, and the color gamut which is currently difficult to reproduce will be available as Mimaki printers technologically advance even more.

As such trend moves forward, I ask myself what I should do in the future, and what comes to my mind first is revitalization of the industry. When major apparel companies are moving their production bases to foreign countries, I wonder how I can shed light on possibilities of textile designers and show a best practice. I feel that something interesting will happen if there are more people having good taste as a designer and persistence as a craftsperson. As a pioneering user of inkjet printers, I would be happy to work with Mimaki on a "moving showroom" project, where I will show all of myself as I work actually.

Founded in January 1994. The company fully uses inkjet printers to make proposals on its original textile, and receives many requests from apparel designers. By embodying the images that designers imagine and adding textile-specific skills and expertise, the company continues to propose a design that exceeds client's expectation.